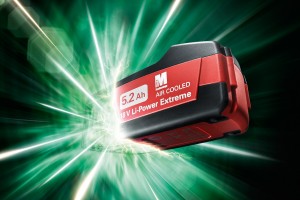 Continuing a trend that started with the introduction of the first 4.0 Ah battery a little over a year ago, Metabo continues to heavily invest in the development of cordless technology for its primary focus of professional users in the industrial and metal working industries.

Building on Metabo’s Ultra-M Technology, designers were able to increase the battery output to 5.2 Ah and up the run time by 75 percent without adding additional size or weight to the battery itself.  Additionally, the 5.2 Ah battery will run in extreme temperatures ranging from 5°F to 122°F as well as be fully compatible with all of Metabo’s past, present and future 18 V systems.

The Ultra-M technology was designed specifically for industrial users, whose applications typically demand more power and longer run times.  The key behind the system is a microchip in the battery that effectively communicates with the tool and battery charger.  This ongoing communications ensures that each battery cell is evenly charged and discharged every single time, thus greatly extending the life of the battery as well as protecting the tools being used.

Productivity is also greatly increased as a hot “spent” battery can be placed in the charger immediately after disconnecting from the tool.  The charger’s built-in fan system quickly cools the battery pack as it begins the charging cycle, thus reducing overall charging time.

The result is a battery that will effectively survive more charge/discharge cycles than other battery systems.  And to back their claim, Metabo is offering an unconditional three-year guarantee on their battery and charging system.  If for any reason, the battery does not charge, Metabo will replace it.