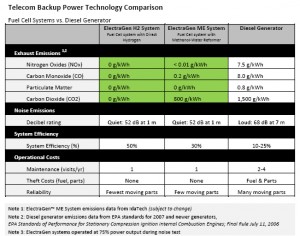 With society’s reliance on mobile networks to power smart communications devices, having backup power at base station sites is critical in the event of power loss from severe weather, natural disasters or limited grid capacity.

Lower fuel cell operating costs are the result of only one maintenance visit per year and significantly higher system efficiency. Fuel cells also offer environmental and economical advantages to end users because disposal costs and liability risks related to lead acid batteries are an increasing concern. In California, for example, telecom sites with more than 500 pounds of lead acid batteries or one gallon of acid face fees from the state.

The system continuously senses the direct current (DC) bus voltage and seamlessly takes over critical loads if the DC bus falls below a customer-determined set point. The system is fueled by hydrogen, which is delivered to the fuel cell stack in one of two ways: either from a commercial-grade hydrogen supply or a methanol and water liquid fuel, using an integrated reformer system. 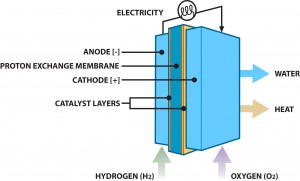 Eliminating Emissions
Fuel cells can virtually eliminate the two most highly toxic emissions of diesel generators: nitrogen oxides (NOx) and sulphur oxides (SOx), which together are the main causes of acid rain and also contribute to the ozone formation in the air and ground. 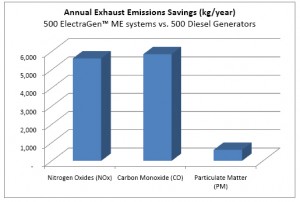 Fuel cell systems are quieter and have significantly less vibration than diesel generators. Quiet operation is highly valued in areas where people live and sleep and can result in a lower incidence of vandalism. 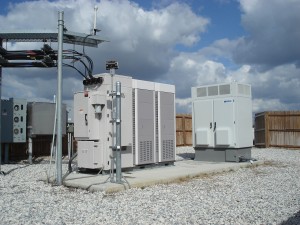 However, most telecom transmission equipment can operate at temperatures up to 35°C to 40°C without any deterioration or performance degradation. By removing batteries from the shelter, a more efficient cabinet cooling method can be used such as DC air-cooling systems.

New-generation DC air-cooling systems offer improved efficiency and performance for telecom sites. Backup power fuel cell systems operate at temperatures up to 46°C and do not require air conditioning. Reducing batteries at a telecom site and adding a fuel cell system will relax the temperature cooling requirements and will lower operating costs.

As our society continues to increase its reliance on wireless technologies and also its commitment to protecting the planet, backup power fuel cell systems will present clean technology solutions that lower operating costs, improve network reliability and benefit the environment.

This article was printed in May/June 2011 issue of Battery Power magazine.