Lithium-ion batteries are becoming a mainstream battery choice for consumer and automotive applications, as well as solutions for large scale energy storage due to their advantages over other existing battery chemistries. Unfortunately, there are certain challenges often associated with the intercalation chemistry currently embedded with existing lithium-ion batteries. One of the biggest challenges is the projection of only modest future cost reduction.  In order for electrical energy storage to become a realistic replacement for conventional energy storage, i.e., coal, oil, natural gas and other hydrocarbons – choose your poison, drastic reduction of the cost of storing electrical energy has to occur.

While there are known strategies to improve lithium ion battery technology to reduce costs at the material, electrode, cell, and manufacturing levels, most improvement in battery performance to date has come about due to improved chemistry rather than from ongoing improvement within an existing chemistry. This implies slower than desired cost reduction associated with the conventional intercalation chemistry currently in use by lithium-ion batteries to date, which has only experienced incremental cost reduction.

Keeping this in mind, batteries are generally suitable for applications that require high energy storage but not necessarily require rapid charging and discharging. Therefore, use of batteries in electric vehicles are ideal but not necessarily for other types of electrical energy storage devices. Supercapacitors are generally better suited for applications that require rapid charging and discharging rather than high energy storage for prolonged operation. Thus, a supercapacitor is a better option for hybrid electric backhoes and front end loaders that require intermittent bursts of power to handle occasional heavy lifting.

Further, a combination of lithium-ion batteries and supercapacitors may be suitable for hybrid electric vehicles. Supercapacitors can handle the high frequency nature of charging and discharging, whereas the high energy storage capacity of batteries provides longer range so that the entire electrical storage system is more cost efficient as well as reliable. Certain consumer electronic devices prioritize long life cycles over high capacity, while others may emphasize lower cost.  Medical implant devices or wearable technology devices may emphasize the smallest footprint possible, and thinnest form factor with high density energy storage for the lifetime of product use.

Specific markets also call for a different order of priorities.  The Electric and Hybrid Vehicles market may require higher capacity, faster charging ability, lower cost, and a long cycle life.  Consumer Electronic markets generally call for higher capacity and the lowest cost possible to the consumer. Grid storage for frequency regulations, however, require long life cycle and fast charging/discharging characteristics, while large scale grid storage seeks lower cost, but not necessary high energy density. Long cycle life is usually not a concern for flow batteries due to its ability to replace active components as many time as required during the life of the product.

Due to its many desirable characteristics sought by a wide range of markets and device applications, lithium-ion batteries are becoming a mainstream battery choice for all applications including consumer, automotive, and large scale energy storage.  According to a recent study published by Allied Market Research entitled, “World Lithium-Ion Battery Market: Opportunities and Forecasts, 2015-2022,” the global lithium-ion battery market is expected to generate revenue of $46.21 billion by 2022, with a CAGR of 10.8 percent during the forecast period (2016-2022). Currently, the market is very concentrated, as over 70 percent of installed energy storage capacity uses lithium-ion batteries, as the technology is proven and bankable.

Lithium-ion Batteries
The advantages of lithium-ion batteries are, among others:

The challenges of lithium-ion batteries are:

How Today’s Lithium-ion Batteries are Made
In general, the negative electrode of a conventional lithium-ion cell is made from carbon. The positive electrode is a metal oxide, and the electrolyte is a lithium salt in an organic solvent.  Cells of lithium ion batteries can generally be classified into four groups according to its shapes: small cylindrical (solid body without terminals, such as for laptop batteries); large cylindrical (solid body with large threaded terminals); pouch (soft, flat body, such as those used in cell phones); and prismatic (semi-hard plastic case with large threaded terminals, for vehicle traction packs).

Typical manufacturing process for laptops and electric vehicle batteries entail mixing materials to form cathodes and anodes (into a slurry form); coating of the electrode material on the collector foil; drying followed by calendaring (pressed to evenly distribute the coating material); and cutting electrode sheets into final assembly to be fitted into cylindrical casing and hermetically sealed.

Manufacturing process for cylindrical cells requires the electrolytes be formed from pastes of active material powders, binders, solvents, and additives to be fed to coating machines and spread on current collector foils, such as aluminum for the cathode side and copper for the anode side. Next, there is a subsequent calendaring for homogeneous thickness and particle size, followed by slitting to the correct width. These components are then stacked to separator-anode–separator-cathode stacks, followed by winding to cylindrical cells, insertion in cylindrical cases, and welding of a conducting tab. These cells are then filled with electrolytes.

The electrolyte has to wet the separator, soak in, then wet the electrodes. The wetting and soaking process is the slowest step and therefore is the determining factor in the speed of the line.  All other needed insulators, seals, and safety devices are then attached and connected before the cells are charged and tested for the first time. It is quite common for cells to be vented during the first charge.

First charging cycles follow sophisticated protocols to enhance the performance, cycling behavior, and service life of the cells, as they have a direct impact on long-term efficiency. Recently, efforts have been made in combined and hybrid processing, such as direct deposition of separators onto electrodes and rapid heat treatments.

Unfortunately, the use of slurry to manufacture cathodes has many disadvantages. One, there is no solubility, as a slurry is just another name for a suspension. There is also no guarantee of material homogeneity with slurries. When the solvent is removed from the slurry, the resulting film is very rough and instead of coalescing, analogous pieces stick together like ‘Rice Crispy Treats.’ This issue is currently being addressed by calendaring, but the surface cannot be made as smooth as it possibly could be, enabling micro voids to be created between the particles.  Furthermore, commercial calendars are very expensive and difficult to maintain, and ultimately the winding of the ‘Swiss Roll’ needs to occur before complete drying to avoid cracking. 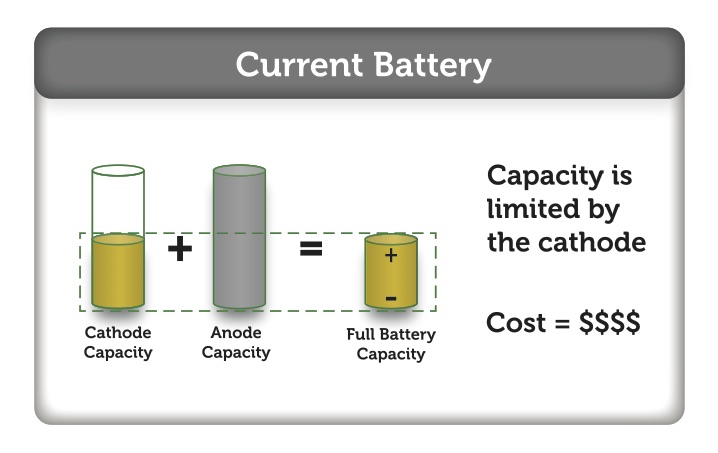 As you may deduce, there is potential improvement within the manufacturing of electrodes that can translate into substantial manufacturing cost reduction. This is only realizable if the electrode material currently in a slurry form can be replaced by electrode material that can be made into homogeneous film possessing a very controlled thickness and width. This will allow the coating process to be relatively simple, inexpensive, and environmentally clean, using water as the solvent. The resulting film (an electrode sheet) then can be immediately laminated onto another film (layers of electrode sheets), and most remarkably, the winding of the resulting electrode film can be done at any time without any risk of cracking.

Cost/KWh of Energy Storage using Lithium-Ion Batteries
Moore’s Law is the observation that, over the history of computing hardware, the number of transistors in a dense integrated circuit has doubled approximately every two years. After 50 years, Moore’s Law solidified itself as the golden rule for the electronics industry and has economic, technological, and societal impact.

However, Moore’s Law does not apply to batteries. The exponential increase of computer power over a long period of time is due to advances in lithography and technology, and has no fundamental meaning, nor should an exponential increase to be expected in any other area of technology. In fact, ongoing improvements in processors will slow and eventually stop as feature sizes approach atomic dimensions, if heat dissipation does not stop improvement before then.

The scale of economy based on conventional intercalation chemistry tends to result in only incremental cost reduction, and there exists no evidence to support the specific energy of batteries increasing in any regular fashion. Indeed, most improvement in battery performance has come about from changing chemistry rather than from ongoing improvement within a given chemistry.

In general, there are three ways to improve lithium-ion batteries to reduce cost. At the material level, these batteries require materials that support high power and a wide State of Charge (SOC) range, minimal impedance growth, and calendar aging. At the cell level, there are needs for new chemistry and electrode designs permitting shorter and thicker electrodes. In general but with exception, chemistries and designs that enable lower overall electrode area per battery and minimize battery size, will ultimately reduce cost. At the manufacturing level – identification and adoption of advanced processing technologies are needed to increase coater speed and/or other unit operations significantly.

The Need to Reduce the Cost of Lithium Ion Batteries 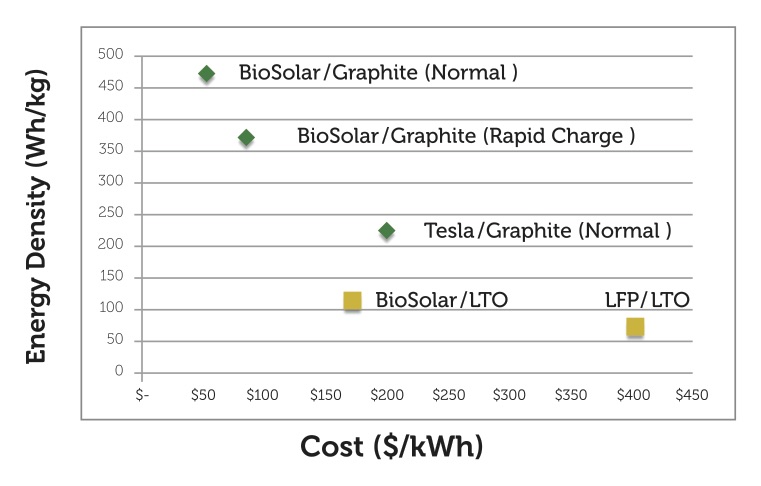 The high costs of batteries represent a significant challenge and barrier to mass adoption for automotive manufacturers that produce electric vehicles. As stated earlier, the current cost of storing electrical energy using lithium-ion batteries is above $500/kWh.

Additionally, the life cycle of a lithium-ion battery needs to be extended. Currently, owners of electric vehicles have to purchase several replacement battery packs multiple times throughout the lifetime of their vehicle ownership. Thus, electric vehicles would make more economic sense if the battery’s life cycle paralleled the vehicle ownership.  Again, potential breakthrough solutions that drastically improve life cycles will most likely require exploring a new lithium-ion battery chemistry rather than continuing to focus on just improving conventional intercalation chemistry that promises only incremental improvements over existing solutions.

A Solution to Drastically Lower the Cost of Lithium Ion Batteries
BioSolar’s current research program focuses on improving the capacity and lowering the cost of storing electrical energy with lithium-ion batteries. In addition to developing technologies to commercialize in the near term, the company’s long-term product development objective is to completely abandon the traditional intercalation chemistry in favor of a new redox chemistry with the use of low-cost conducting polymer based electrode materials.

The company’s proprietary cathode material under consideration uses a combination of commercially available polymers and other raw materials to make up the redox-supporting cathode structure. This polymer blend can then be coated over a metal substrate using a simple proprietary coating process. This process can be substantially more cost-effective in comparison to the existing method that currently utilizes expensive and energy-intensive slurrying and calendaring for existing cathodes in lithium-ion batteries.

Improving the chemistry of existing lithium-ion batteries may continue to provide a temporary positive return on investment for battery manufacturers; nevertheless, exploring new chemistries holds the key to drastic cost reduction. Doing so will lower the cost of manufacturing and extend the lifetime of lithium-ion batteries, enabling mass adoption for electric vehicles as well as improvements in battery capabilities for personal electronics needs.