Why the LG Chem Advertisement about Lithium-ion Batteries is Irresponsible

February 27, 2020 | On February 3, 2020, LG Chem, a battery manufacturing giant, released an advertisement in The Washington Post telling the public not to use (handle) lithium-ion batteries. These batteries are similar to the well-known AA and AAA batteries that have been used in flashlights since 1899, but they are rechargeable—which many consumers consider as a benefit in terms of battery life, cost, re-use, and environmental impact. In their announcement, LG Chem uses the term ‘cell’ and ‘bare cell’ in an attempt to distinguish this from a battery. But consumers understand what a battery is and expecting consumers to distinguish between a battery and a “bare cell” is both unrealistic and irresponsible. 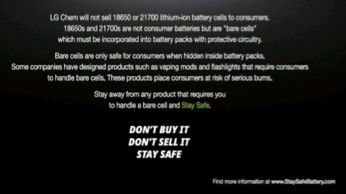 But LG Chem’s advertisement shows a burning cylindrical battery and makes ominous and confusing statements about specific types of lithium-ion battery cells. In addition to this full-page announcement, LG Chem also posted the video “Don’t Buy It. Don’t Sell It. Stay Safe” on YouTube on January 14, 2020. As of February 21, 2020, the video received 3500 dislikes and approximately 600 likes.

The video caption states that “LG Chem manufactures and distributes Lithium-ion cells to industrial and business purchasers only.” This is quite normal for large companies. Intel, for example, doesn’t sell its microprocessors directly to consumers, but to companies that will buy tens of millions of those products, including distributors. But distributors have their own customers and eventually these batteries, just like Intel microprocessors, are available to the general public. For example, third-party websites sell LG 18650 batteries.

The difference, of course, is that it is readily foreseeable that consumers will remove and handle the batteries that are included with products they buy. Expecting consumers to distinguish between a battery and a “bare cell” is both unrealistic and irresponsible. By running ads instead of ensuring the safety of its batteries when they inevitably end up in the hands of consumers, LG Chem is avoiding their social and corporate responsibility. LG Chem should prohibit their industrial and business customers from making products that have replaceable batteries, prohibit the reselling of their batteries through distribution channels, and ensure that their batteries are safe—regardless of whether they are ultimately installed in a flashlight or a vaping device.

While it is true that lithium-ion batteries can catch fire and even explode, the problem is not with the consumers who use them.  When consumers buy batteries for their flashlights, for example, they don’t expect the batteries to catch fire or explode; rather they expect that the battery manufacturer will sell a reliable and safe product. If we followed the advice of LG Chem, however, we would stop using flashlights, smartphones, hoverboards, electric toothbrushes, vaping devices, and any other product that offers the option to use rechargeable lithium-ion batteries.

The YouTube video by LG Chem, with its menacing music and pyrotechnic effects, suggests that the wrapper of the bare cells can be damaged simply by inserting or removing them from a charger. To the extent that a battery is damaged due to such foreseeable use, it is the responsibility of battery manufacturers to design and select packaging materials that are safe for this type of expected use. There is no reason for LG Chem to expect their battery products only to be used by skilled manufacturers. And most good companies know this; in fact, UL 2054 Standard, titled “Underwriters Laboratories Inc. Standard for Safety – Household and Commercial Batteries” requires that no battery catch fire or explode due to an external short circuit. Furthermore, the CALCE battery team has conducted numerous studies of 18650 batteries that do not catch fire or explode even when short circuited. LG Chem should be able to make safe batteries. It is LG Chem’s responsibility to follow UL standards and employ effective internal safety mechanisms, such as a positive temperature coefficient resistor (PTC), current interruption device (CID), and shutdown separators, which can prevent thermal runaway and battery fires and explosions.

If LG Chem doesn’t want the public to handle its “bare cell” batteries, then it must make certain that they aren’t available for sale to consumers in the public market, either directly or through distribution channels. Until then, at the very minimum, each of these batteries (i.e., battery cells) must be marked with a warning statement that makes clear they should not be purchased or handled due to their inherently hazardous propensities, and use all the safety measures that are available in batteries today.  In the past, LG Chem did not do that. The good news is that the LG 18650 cell apparently will have a new wrap which has a warning on it that says “Risk of disfiguring fire/explosion injury. Battery is NOT for consumer use. OEM only! If you can see this label do NOT use this battery.”

Weiping Diao, Lingxi Kong and Michael Pecht are researchers at Center for Advanced Life Cycle Engineering (CALCE) Battery Research Group at the University of Maryland. The group can be reached through Michael Pecht, Director of CALCE, at pecht@umd.edu