Opportunities and Challenges for Electrochemical Energy Storage on the Electricity Grid

April 13, 2021 | Lithium-ion batteries have proven to be the leading energy storage technology for portable devices and electric vehicles. Grid-scale storage, on the other hand, is an evolving sector with no clear technology winner moving forward. A variety of presentations at the 2021 International Battery Seminar and Exhibit highlighted opportunities and challenges for batteries on the electricity grid.

We must start with a better understanding of what grid-scale storage means in practice. Different battery applications have competing needs and trade-offs, which explains the diversity of battery chemistries, cells form factors, and power vs. energy cells. This is particularly true at the grid level where, in principle, there are demands ranging from the millisecond timescale all the way to weeks and months. Dr. Raymond Byrne, an electrical engineer from Sandia National Laboratories, differentiated energy applications such as arbitrage, renewable energy time shifts, time-of-use charge reduction, transmission and distribution upgrade deferral, and grid resiliency from power applications such as frequency regulation, voltage support, small signal stability, and renewable capacity firming.

In his presentation, Byrne collated five years of recent data from the California grid and modeled the financial case for a solar + storage system with 1 MW of photovoltaic (PV) generation combined with a 1 MW (power rating), 4 MWh (energy rating) battery. Based on a system cost of $2 million, the best-case scenario in the hour-ahead market was an 11-year payback time, but the median scenario was closer to 20 years. The financial situation is even more challenging in the day-ahead market where modeled revenue is limited to $10–15k per year. Thus, Byrne’s talk highlighted the challenges of battery energy storage systems for energy applications on the grid. However, he ended by noting that this does not account for green energy subsidies or other revenue streams such as the higher-valued power applications.

Naturally, most of the grid-focused scenarios for batteries are looking toward more profitable applications. Dr. Dipti Kamath of Oak Ridge National Laboratory, formerly Michigan State University, looked at both sides of the meter as she described the cost and carbon footprint implications of using second-life electric vehicle batteries for residential storage, PV firming, and peak shaving in a collaboration with Ford. Installing disused EV batteries on the grid in a second-life application could be an attractive option from cost and environmental perspectives, but the second-life is expected to be shorter than the first due to aging and degradation so the prospective benefits are not foregone conclusions.

After modeling the relevant parameters and comparing PV without storage, new batteries, and second-life batteries, she concluded that second-life batteries do indeed have the lowest levelized cost of electricity and the global warming potential for residential storage and PV firming, but that the benefits for peak shaving depend strongly on the electricity source (e.g., coal, nuclear, hydro) and will thus vary regionally. Dr. Holger Hasse of the Technical University of Munich went a step further and looked at more complex algorithms for profit optimization of grid batteries involving dynamic stacking with switching between behind-the-meter and in-front-of-the-meter applications (see figure from Englberger et al. reference 4, reproduced under CC-BY license). Hasse noted that technical and regulatory constraints need to be considered for dynamic stacking but that it could yield more profit for an energy storage system, maximizing power and energy value. For those interested, his team has made open-source modeling tools available to the community. 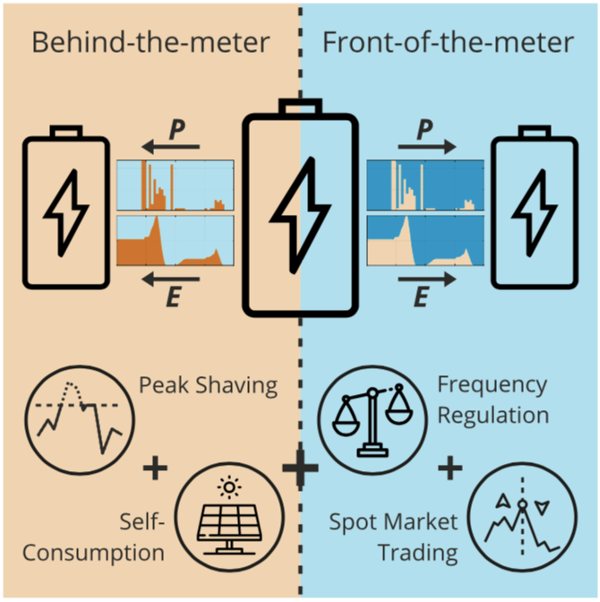 As the costs of batteries come down, there are an increasing range of possible grid applications. Unlike portable electronics or EVs, grid applications typically seek at least a 20-year lifetime, so battery durability is critical. Dr. Volkan Kumtepeli highlighted the importance of advanced physics-based models in accurately assessing the influence of different use scenarios degradation in addition to profit. His colleagues in the Battery Intelligence Laboratory at Oxford University have open-access papers and open-source programs available to the community for modeling battery degradation. Further techno-economic modeling comparing battery storage to thermal and mechanical grid storage technologies has been recently published from the University of Alberta.

There is also exciting work underway on new beyond-Li battery technologies, most of which are specifically focused on grid applications. Dr. Lynn Trahey presented a perspective from the Joint Center for Energy Storage Research (JCESR), noting diverse technologies of interest including Na-ion, Mg-ion, Ca-ion, Zn-ion, lithium-sulfur, metal-air, and redox flow. A key motivation for all of these technologies is the prospect of lower cost and more abundant raw materials, moving away from lithium and ideally the nickel and cobalt resources typically associated with lithium-ion batteries. Research is ongoing to identify suitable electrode and electrolyte materials for most of these cases, though there are prominent start-ups and scale-up efforts underway too. As a grid-specific technology, stationary redox flow batteries are of interest owing to the decoupled energy and power capability and possible cost and safety advantages, particularly with a water-based flow medium.

Zinc-ion batteries are another technology being pursued with a focus on stationary and grid applications. Zinc battery chemistry has a long and chemically diverse history, dating back to the famous Voltaic pile, Daniell cell, and Leclanché cell of the 1800’s, as discussed by Dr. Marshall Schroeder. Among the motivations for Zn battery chemistry are low cost, safety—particularly with water-based electrolytes, sustainability, and low toxicity.

Zinc metal anodes have the proclivity to form dendrites projecting off the surface, analogous to those that can form in lithium metal or even some lithium-ion batteries. As part of addressing this challenge, Schroeder has been working with a team at the Army Research Laboratory and collaborators from the University of Maryland to identify the limitations of and possible solutions to reversible zinc plating and stripping. He noted that the coulombic efficiency in non-aqueous solvents such as propylene carbonate and triethyl phosphate is much higher than in aqueous systems across a range of temperatures, current collector materials, and voltage windows.

Dr. Gautam Yadav from Urban Electric Power (UEP) in New York was another speaker at the International Battery Seminar and he discussed their zinc/manganese dioxide batteries. Yadav detailed their first- and second-generation aqueous zinc batteries and reported that their already-deployed gen. 1 product has volumetric and gravimetric energy densities approximately twice as high as lead acid (absorbent glass mat) and on par with lithium iron phosphate. The UEP batteries are installed in uninterruptible power supply (UPS) grid applications at the City College of New York and have proposed to replace the valve-regulated lead acid battery backup at the San Diego Supercomputer Center. Solar storage is another prime application for zinc chemistry, according to Yadav, and UEP batteries have been demonstrated in this context with partners in India.

Continuing on the commercial side, Dr. Tomasz Poznar from A123 Systems noted that, in the more conventional lithium-ion space, they have both NMC and LFP product lines for grid applications but that toward LFP for its enhanced safety characteristics. Dr. Fabio Albano of NexTech Batteries discussed lithium-sulfur batteries as a prospective large-scale and low cost energy storage solution for the grid.

One of the challenges with electrochemical grid-scale storage technologies lies in testing and modeling battery performance and degradation over the relevant timescale of 20+ years. Dr. Matthieu Dubarry of the Hawaii Natural Energy Institute and University of Hawaii described the importance of a combined approach where experimental battery testing data is fed into a predictive model. His team conducted laboratory tests on LTO battery cells for 450 days, after which only about 1% capacity fade was observed under most testing conditions. This minimal degradation is ideal for grid storage, but it makes it challenging to predict 20-year performance.

Dubarry looked deeper into the root degradation mechanisms, identifying lithium inventory loss and cathode active material loss as the primary issues. These insights allowed him to develop models to more accurately predict future and delayed or non-linear degradation. In the end, Dubarry concluded that the right lithium-ion cells are already well-adapted for most grid applications including those taking place at three installed energy storage systems on the Hawaiian islands today.