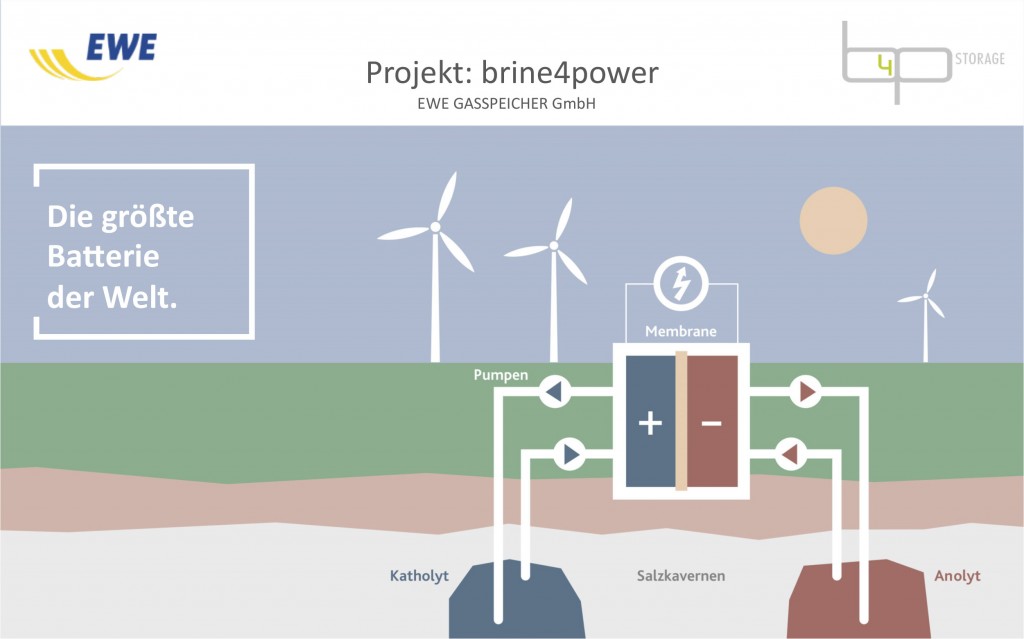 July 23, 2017 | News Brief | EWE GASSPEICHER GmbH, a wholly owned subsidiary of the Oldenburg-based utility company EWE, plans to build the worlds largest battery by employing the well-known redox flow battery principle in which electrical energy is stored in a liquid, along with new, environmentally friendly components in underground salt caverns. These kinds of caverns are currently used to store natural gas. EWE GASSPEICHER is collaborating on the project, brine for power (b4p for short), with the Friedrich Schiller University in Jena, which developed the innovative components. It uses salt water and recyclable polymers (plastics).

We need to carry out some more tests and clarify several issues before we can use the storage principle indicated by the University of Jena in underground caverns. However, I expect that we will have an operating cavern battery by about the end of 2023, said Ralf Riekenberg, head of the brine4power project.

If everything works, this may fundamentally change the storage market, i.e. the market for control energy. The amount of electricity this kind of storage facility contains, consisting of two medium-sized caverns, is sufficient to supply a major city such as Berlin with electricity for an hour. It means that we will have built the worlds largest battery. In contrast to other energy storage facilities that convert the electrical current into other energy carriers, for example into compressed air, we are storing the electricity directly with brine4power, said EWE GASSPEICHER GmbH Managing Director, Peter Schmidt.

The fundamental principle of the redox flow battery goes back to the middle of the 20th century. Electrical energy is stored in liquid in which certain chemicals are dissolved. These solutions are called electrolytes.

The power supply from outside (for example from electricity generated by wind turbines or photovoltaic power plants) effectively snatches away the electrons from the catholyte (oxidation) and feeds them to the anolyte, which binds them to itself (reduction), charging the battery.

On discharging, the stronger electron bonder, the catholyte, snatches back the electrons from the weaker one, the anolyte, creating a useful flow of electricity. That is the general principle.

Electrolytes previously used included environmentally polluting salts of heavy metals such as vanadium dissolved in sulphuric acid. The Friedrich Schiller University in Jena has now developed a redox flow battery that uses recyclable polymers (plastics) dissolved in salt water as an electrolyte. Containers previously used for this purpose were about the size of a water butt.

This development of the University of Jena gave experts at EWE GASSPEICHER GmbH the idea, currently being assessed by the patent office, to use underground salt caverns as containers. These are cavities situated in a salt dome normally used for storing natural gas and are some are even so large they could fit Cologne Cathedral inside.

Since salt water in caverns is also known as brine and we intend to store power according to the redox flow principle, we have named the project brine4power, or b4p for short, said project manager Ralf Riekenberg.

However, we will not initially be using actual caverns, but enormous plastic containers that will be set up at the gas storage facility in Jemgum in East Frisia, probably in the fourth quarter of this year.