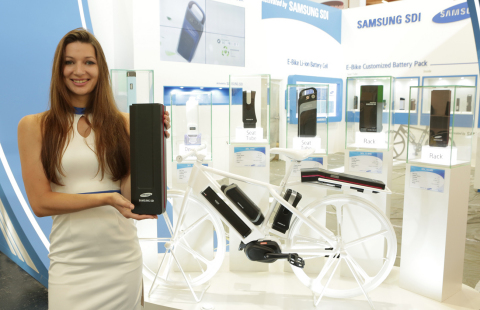 Recent vitalization of eco-friendly e-bicycle market and higher demand for long distance products – due to the diversification of usage in leisure, commuting, and others – have prompted Samsung SDI to develop its high capacity battery packs.

Samsung SDI also unveiled a battery pack product equipped with 21700 batteries, noted for their upgraded energy capacity compared to previous cylindrical types. The 18650 battery, or rather the small cylindrical battery of 18 mm diameter and 65 mm length, has been in dominant use until recently. However, the creation of new battery applications has boosted the demand for high capacity batteries. In response, Samsung SDI has come up with a battery that has upgraded a maximum of 35 percent of energy volume, now known as the 21700 battery, and has successfully applied it onto e-bikes for the first in the world.

The 21700 model can have various applications other than e-bike, such as in electric tools, laptops, and more. It is expected to become the new standard in small cylindrical battery usage.