Why and how should you balance?
In Part 1, we got into the basic concept of cell imbalance in a multi-cell, Li-Ion battery pack, and why you should care about it. Now, let’s think about how cells become imbalanced in the first place.

To begin with, there can be slight variations in exact capacity between cells of the same type (and from the same production lot). If you look at the technical specs for a cell (or anything, for that matter) there is usually a “typical” number for critical parameters like capacity, impedance, and so on, but also a tolerance associated with the typical values. For a specific cell type, there can be small variations between individual samples in terms of their amp-hour capacities and DC and AC resistances. However, even if the cells were exactly matched from the start, they can diverge over time (primarily) due to temperature differences during use.

Particularly in larger packs, all of the cells may not be exposed to the same temperature profile during their lifetime. If one cell is closer to a heat source (high power processor, motor, or internal power conversion circuitry) than others, then that cell will experience greater thermal stresses than its neighbors and is likely to degrade faster.

If we want to avoid increasing the mismatch between a weak cell and its stronger neighboring cells on each usage cycle, the simplest mechanism for re-balancing the cells on each charge is illustrated in our next figure. As all the cells are charged in series, let’s say one of them gets closer to full faster than all the others because it was just slightly higher starting out. At this point, we could stop charging the whole pack, just to be safe. But then we would essentially never get back to “full” for all the other cells (and the pack as a whole will have reduced capacity each time). A better approach is to just bypass some of the current around the “almost full” cell and keep the others charging at the full charge rate. This way, the weaker cells keep getting replenished at a higher rate than the stronger ones, and eventually they will all be charged to full (or nearly full). After multiple charge cycles, the cells will stay much more closely matched than without the balancing circuit. 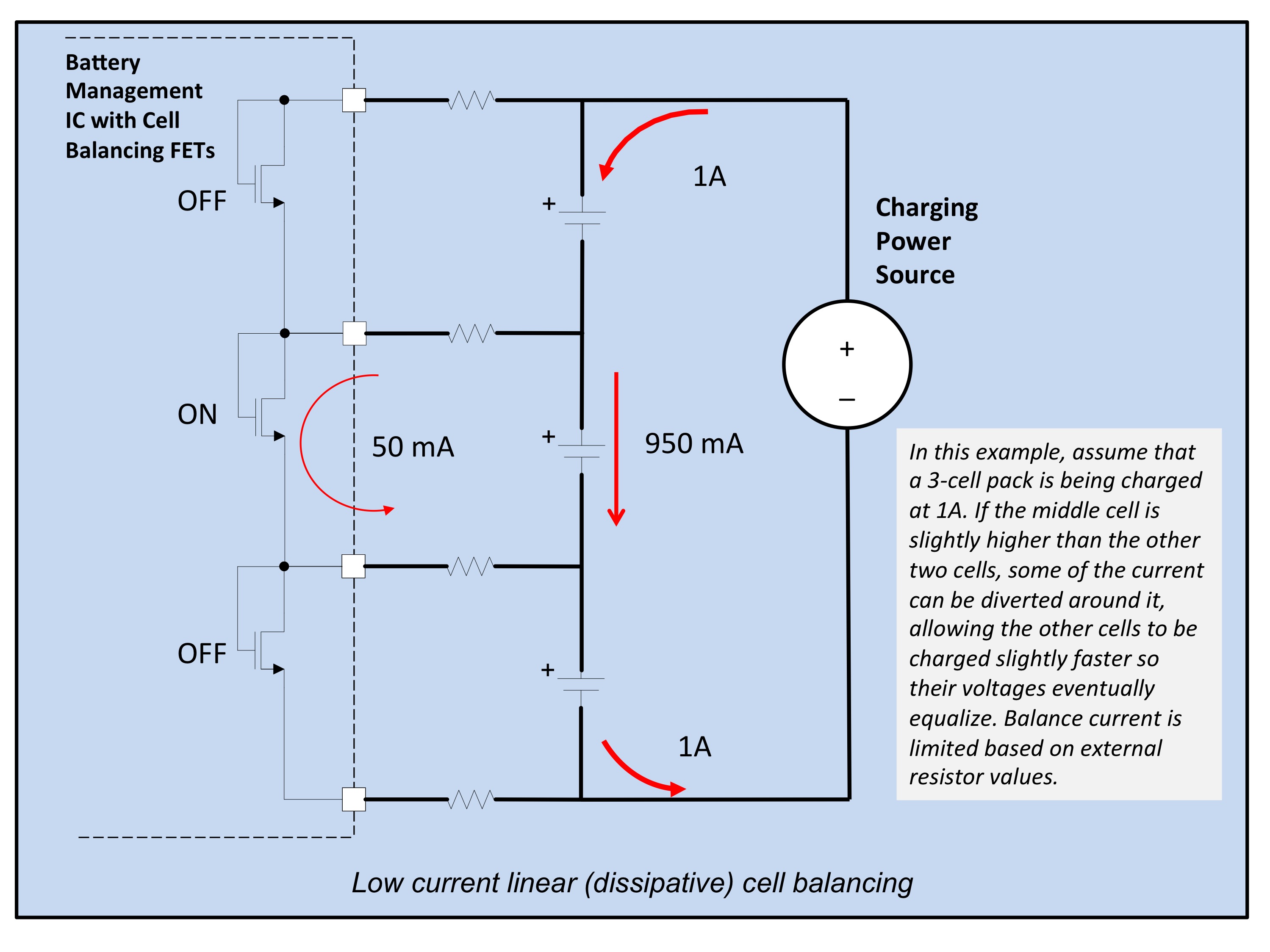 This circuit is comparable to putting a linear shunt-regulator in parallel with each cell. We know that linear regulators are inherently lossy, but relatively simple to implement. However, the losses are not usually significant. Cell balancing is normally done only during charging (not during standby or discharge modes for the battery pack, so we don’t waste cell capacity). It’s worth mentioning that the bypass current does not have to be very high – often less than 0.5 percent of the fast charge current is enough. If the cells start out closely matched, we only have to make very small corrections on each charge cycle.

For very large cells, or cells that start out with significant imbalance, we may need a high-current “active balancing” approach as implemented in the EMB1499 / EMB1428 chipset. This design takes a switch-mode approach and efficiently transfers energy from a high cell back in to the rest of the pack. We can now minimize losses compared to the dissipative current bypass used in the simpler circuits that were discussed before. This type of solution is more complicated, but suitable for higher power levels and/or very large battery packs (such as in electric vehicles or large UPS batteries) where the complexity and added cost are justified.

So, if you want longer service life and consistent performance for your battery pack, cell balancing is something you should definitely think about.

Refer to the following documents at www.ti.com for additional information:

Honey, I Shrunk the Battery!