As a commercial test lab specializing in regulatory and performance testing of rechargeable lithium batteries, we assist a wide variety of clients spanning all aspects of the electronics industry.  Many come from highly-regulated product types that typically have well established requirements for safety, quality, and reliability.  They also tend to have the engineering and compliance resources to support these requirements, and as such, command a corresponding price premium.  In short, they inherently understand the value of testing favoring a more proactive approach.  At the opposite end are those markets that are typically lower price points and do not have the extensive requirements common to higher reliability applications.  Most fall somewhere into the consumer space and may not have engineering or compliance professionals internally.  By their nature, responses to safety, quality or reliability challenges tend to be more reactive.

To be fair, it is not uncommon or unacceptable for businesses to reactively handle quality and reliability issues through normal business means.  If the product experiences an early term loss of operation, the seller might repair the device, provide a replacement or offer a refund under the terms of their warranty.  With safety failures potentially involving personal injury or property damage, the remedial actions become much more difficult. Anyone who has personally experienced a recall or the related interaction with government regulators knows it a situation best avoided.  In addition to loss of sales, companies may experience law suits, substantial fines and loss of brand reputation.  Depending on the severity of the situation, it is very possible that the business itself may not survive.

With the world continuing to go more portable, lithium-ion (Li-ion) and lithium-polymer (LiP) rechargeable batteries have become ubiquitous.  Cell phones, computers, toys, plus a myriad of commercial and industrial devices, enjoy Li-ion’s relatively low cost, light weight and very high energy; however, such advantages do come at a price.  Designed or manufactured improperly, all that energy can result in unexpected and undesirable thermal events causing significant harm.  Although failure rates for high quality Li-ion cells are anecdotally quoted to be in the 1 part in 10 million order of magnitude, the Internet is full of video showing lithium powered devices catching fire and exploding.

So where is the balance between economic realities and risk management for rechargeable lithium powered products?  Too many times, the economics are used as an excuse to do nothing.  Common responses as to why testing isn’t being done include, “it costs too much”, “it takes too much time”, or “we don’t have the (engineering) resources to support that”.  Additionally, there is sometimes an over-reliance on suppliers to understand and manage the safety risk without proper oversight.  These may be legitimate concerns; however, this does not mean that there aren’t viable ways to overcome them to varying degrees.  The two-part premise of this article is first, that mandatory UN transportation testing covers a good number of common lithium ion risks, and second, there are several relatively low-cost, short-duration testing options that can supplement mandatory transportation testing to further complete the risk management picture.

What are some common rechargeable lithium battery risks?  To answer that question, we must first acknowledge that some risks are inherent to the cell itself while other risks come about when the cell is integrated into a battery pack.  The list below is far from all-inclusive, but highlights what many would consider typical.

It is critical to note that the cell itself is always the source of greatest risk.  When bad things happen outside the cell, there is a chance to mitigate potential safety events through protection circuitry or other passive protective devices (PTC, fuses, etc.).  When problems happen inside the cell, such options generally do not exist, particularly in lower-cost, less complex applications.

Successful completion of UN transport testing found in section 38.3 of the UN Manual of Test and Criteria is required to ship lithium cells or batteries by all common commercial modes in almost every global locale.  It requires testing at the cell level, battery pack level, and battery pack assembly level (an assembly of previously tested battery packs).  Commercially available cells are generally tested by cell manufacturers.  Battery packs may be tested by the pack assembler as a client service or independently tested by the supported end-device manufacturer.  The standard is self-certified, so third party testing, although common, is optional.  Typical market parameters (US) are given below.  Note that these are intended only as “order of magnitude” for general reference.

The UN test regime, commonly known as “T1-T8” testing, is extensive in scope and particularly mechanically intense.  A portion of both cells and batteries undergo 50 charge-discharge cycles for aging whereas others are tested fresh (cycle 1).  Tests 1-5 are done in sequentially using the same group of samples.  Testing consists of a high-altitude simulation is followed by 5 days of thermal cycling outside of normal li-ion storage temperatures.  Mechanical testing is next and is comprised of 9 hours of vibration and 18 high energy mechanical shocks.  To round out the sequence, the cells and packs are externally shorted at elevated temperature.  An additional group of cells is mechanically crushed or indented (impact test), while a separate group is reverse charged (forced-discharge).  At the pack level, a separate group of packs is overcharged at elevated voltage and current. 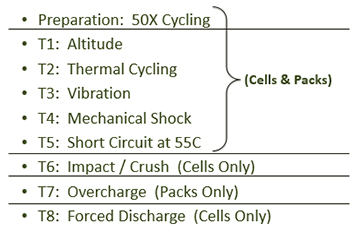 Overlaying our listing of common lithium risks with the UN test profile reveals some positive news: good portion of the identified risks are evaluated, at least to some degree:

To round out the risk profile, what are some testing options that meet the criteria of being low-cost, short-duration, and involve only a small number of samples?  To many people’s surprise, viable options do exist.  With proper equipment and expertise, these can be done in house or alternatively provided by most commercial battery labs.  Let’s begin with the cell level.

Heating Test (<$1k; <1 week; 5 samples):  This test is also known as “Thermal Abuse” and is commonly called a “Hot Oven Test”.  It can be found in various standards such as IEC 62133, UL 1642, and UL 2054.  Its purpose is to provide an assessment of high temperature stability of lithium cells.  This involves the response of the separator as well as the active material in the cell.  The test consists of placing fully-charged cells in a blast oven at room temperature and ramping the temperature at a rate of 5°C/minute to 130°C and holding that for 10 minutes (some newer standards are pushing this out to 30 minutes).  This test will make the cell non-functional by design, but it is how it fails that counts.  Failing safe is acceptable.  Flame or explosion are not.  This test is a good method to evaluate competing cell options, particularly if the soak period is extended past the specified minimum time, ideally to failure.  The reality is that there is a very big difference in stability between a cell that fails at 12 minutes and one that lasts 58 minutes.

Overcharge (<$1k; <1 week; 5 samples):  This is an intentionally destructive test to assess safety margin.  The purpose is to evaluate the cell’s inherent safety when exposed to high voltage and high current, each tested separately.  Both tests are typically run at ambient temperature to minimize costs, but could be run at the maximum specified charging temperature.  Cell voltage, current and temperature should be logged.

What about the pack level?
Safety-Circuit Performance (<$1k, <1 week, 1 sample: non-destructive):  This is a simple evaluation to confirm that the safety circuit protects against over-voltage, over-current and under-voltage as intended.  It is possible that what the designer intended has fallen victim to undesirable variations.  These might include part tolerances, supplier variances, manufacturing variation, interactions with other active or passive components in the circuit, and even undetected negative impacts of intentional design improvements.  This is generally a bench test, but care should be taken particularly when evaluating over-voltage.  It is typically run at ambient conditions to save costs, but could be run at the minimum and maximum charge and discharge temperatures for a more thorough assessment.

Component Temperature Test (<$1.5k, <1 week, 1-2 samples):  This test originates from UL2054.  The intent is to confirm that component thermal specifications are not exceeded during the maximum specified charge and discharge.  It also incorporates the impact of the maximum operating temperatures through calculation, but it must be noted that this approach is overly conservative by nature as it treats increased ambient temperature as a linear impact when it is not.  The test process begins by instrumenting a pack’s critical components with thermocouples.  In a series pack, the series cells (or parallel groups) are instrument for voltage to ensure that cell voltage maximums are not exceeded during charge (imbalance concerns).  The pack is fully discharged for the charge test.  Similarly, a fully charged pack is used for the discharge test.  The same pack can be used for both tests as the testing is non-destructive.

Engineering Teardown of a Battery Pack (~$500, <1 week, 1 sample):  This begins with a review of the internal construction of an actual pack against its assembly specifications.  Are all the safety critical parts included and are they placed where they should be?  A key concern is insulator placement.  These are usually hand placed and manufacturing variation can lead to an increased potential for shorting inside the pack.  Additionally, the mechanical aspects of the pack should be reviewed.  Is the design going to break under physical stress?  In this vein, it is also common to do a teardown after mechanical stress such as vibration, shock, or repetitive drop.  In this case, stress marks or other stress indications should be evaluated for their potential to cause latent defects in actual field use.

Short-Term Cycling with Cell Voltage Tracking (Cost & duration vary with charge and discharge parameters; 3-5 samples):  Recall that the Forced Discharge test (T8) in UN 38.3 gives some insight into the ultimate outcome of cell imbalance in terms of the cell itself.  By cycling the pack while accurately monitoring series cell voltages, one can gain more specific insight as to which cell in the design may be more susceptible to accelerated aging causing capacity imbalance in the pack.  In a pack, this may be caused by factors like parasitic resistances that drain a specific cell or proximity to heat sources (like the FET on the safety circuit) that cause hot spots on the cell and accelerated capacity degradation.  In actual field use, note that the supported host device may unevenly heat the battery as well.  As with most of the tests presented here, it is usually run at normal ambient temperature to reduce costs.

In summary, rechargeable lithium cells and batteries are the predominant power source for our increasingly portable world.  This is unlikely to change in the near future.  Although the technology is mature, it involves very high energy densities and must be designed and manufactured properly to assure safety.  Full compliance to established standards is always the recommended approach.  Insufficient testing and over-reliance on suppliers without proper oversight represents an unacceptable risk with potentially very severe consequences.  Mandatory UN transportation testing covers much of the risk profile.  Past this, a number of inexpensive, short duration, low sample count testing options have been presented that can help further complete the assessment of risk.  Your test lab has a wealth of knowledge about these options and should be both able and willing to provide you guidance on your specific situation.  By all means, talk to them.

John Copeland is co-owner and technical manager for Energy Assurance LLC, an independent, fully-accredited cell and battery test laboratory. His career has included various positions in quality engineering, reliability engineering, failure analysis, project management, supplier assessment, and quality management in the electronics and portable energy sectors. John holds a BSEE from Auburn University, MSQA from Southern Polytechnic State University, and is trained as a Six-Sigma Black Belt. He can be reached at johncopeland@energy-assurance.com.