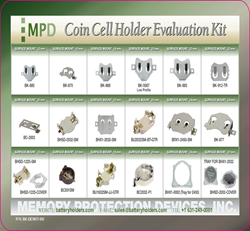 December 5, 2017 | Product Brief | Memory Protection Devices has introduced a new development kit of surface mounting coin cell battery holders, including five pieces of each type. The kit’s battery holders, retainers and gliders offers a wide diversity of the most popular sizes 10 mm to 24 mm diameters and can accommodate various shapes and requirements. With 100 pieces of multiple design choices for mounting common coin cell batteries included, this kit is a useful tool for any designer.

Gliders
Gliders are MPD’s hybrid between a retainer and a holder, offering the price competitiveness of a coin cell retainer, while at the same time offering a  reliable connection. Once the battery has been installed into the tray, it simply glides into the retainer and the tray locks into place. The surface mounting positive contact allows designers to place the battery directly on the surface of the pcb to reduce overall height. Both 20 mm and 24 mm diameter sets are included in the kit.
P/N’s BHX1-2032-SM, BRX1-2450-SM and BHX1-0002.

A Look Inside PENA And Gigafactory Nevada