Thermal runaway is the disaster no one saw coming until it is too late.  It sounds like a horror movie, and it could well be, if batteries are not properly maintained. Every article on the subject will point out something like “If the design of the battery, coupled with the installation location, allows for proper dissipation of increased battery temperatures, thermal runaway is unlikely”.

If, just isn’t a strong enough word, is it?  There are plenty of corny sayings that grandparents used to proclaim about “ifs and buts”, to make anyone realize things like possible battery explosions shouldn’t be left to chance. 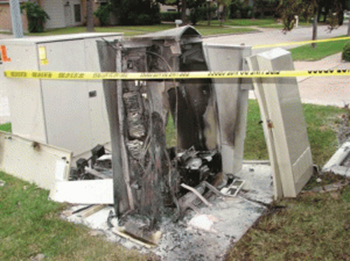 So, what is “Thermal Runaway” besides a cool name for trouble with a capital “T”?  Well, thermal runaway is a failure mode of a battery when it is on a constant voltage charge at an elevated temperature, which leads to its destruction through internal heat generation, due to high charging current.

Under proper environmental conditions, a valve regulated lead acid (VRLA) battery on a float charge remains in a fully charged state, and most produced gases will be recombined internally.  However, if the battery temperature rises, higher current is required to compensate and keep the float current at the designated level.  Additional current results in more generated gas inside the battery, generating more heat, which in turn, raises the cell’s temperature.

The thing is, once thermal runaway begins, it keeps going, unless corrective action is taken.  If the progression does not get corrected, the process keeps repeating and escalating until the battery overheats and destroys itself.  But, when it destroys itself, everything around it will be in danger from released gases and/or possible explosion.

The design of VRLA batteries, as compared to other types, increases the probability of thermal runaway.  Deficient heat dissipation can also be a contributor, due to the design of the installation characteristics.  In many cases, VRLA batteries are crammed into tight quarters.  The restricted footprint does not allow for sufficient air flow around the cells, which compounds the problem of rising temperatures.

Additionally, VRLA batteries may be more sensitive to charger ripple, which in excess can lead to higher battery temperatures.

Now, at least two conditions come to mind, when considering less than ideal battery installation environments; cabinets with poor ventilation in fluctuating temperatures, and any other remote location where access is constrained by location.

In a site that houses other equipment, melting and/or exploding batteries are much more costly than just the batteries. And, the safety of technicians is paramount.

So, what can be done to stop this unseen disaster?  Continuously monitor the batteries.

While thermal runaway is an unseen disaster, that doesn’t mean it cannot be detected.  Once detected, alarms can be sent to correct the charge and lower the temperature.

There is a solution. Many state-of-Health (SOH) continuous battery monitoring systems include thermal runway detection and alarms.  If requested, they can even control the charger and remedy the problem remotely.  That is truly taking control of a bad situation.

Take action before the disaster occurs.  Detect it, and solve for it.  The consequences of “business as usual” can be catastrophic. 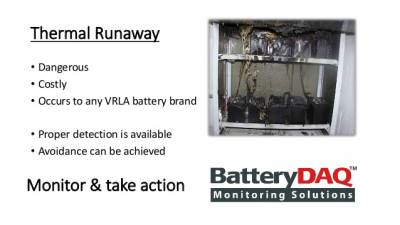